The last few years have made clear the role and impact of networks in our daily lives. Examples include the major role that the Internet as an information transmission network plays in our professional or personal lives; the influence that social networks have in the dissemination of news and information and impact our politics; disease transmission through contact and transportation networks; or the push in science to understand biological processes at the systems level including the emergence of macroscopic phenomenon such as consciousness and memory in neuroscience through the microscopic interaction of neurons. The importance of understanding the above application areas have generated an interdisciplinary effort from a wide array of communities (math, statistics, physics, CS and domain sciences like political science and neuroscience) to both collect data on these systems, postulate models for the evolution of these systems over time and develop models of processes such as epidemics or search algorithms on these systems. A recent talk aimed at high school students describing the motivation for the field can be found here:

I am an applied probabilist and my broad goals are to use techniques in mathematics and statistics to help domain scientists understand properties of their models, help them collect data from these networks via efficient algorithms and develop tools to analyze collected data. In most cases, the models postulated are so complex or the size of these networks are so large that unless one “does the math’’, it is hard to gain insight into these systems and models. Below is an overly verbose description of my research till date. My work falls in three interconnected areas each of which are expanded below (and when the text says “I have worked on” in many cases this means I have worked on this with an amazing set of collaborators, students etc!): 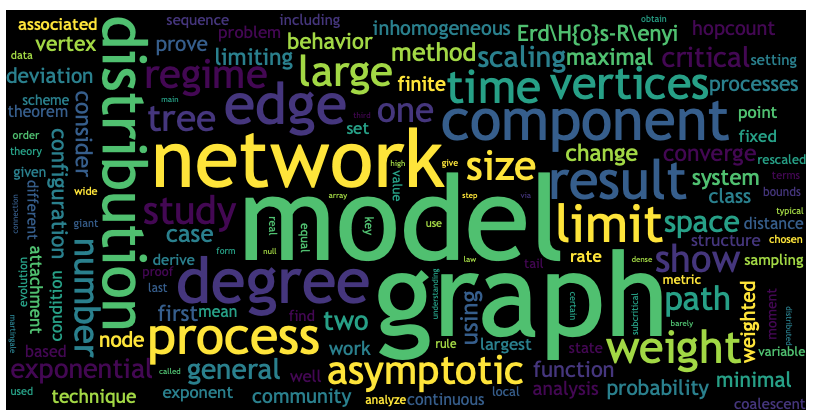 Word cloud from my preprints on Arxiv. Generated using https://marwahaha.github.io/arxiv-wordcloud/

Verbose descriptions of my work can be found below. Numbers in the text below indicated references which are given at the bottom of the page. A video describing technical aspects of some of my recent work can be found here:

Diffusion of information through networks

Transportation networks entrusted with carrying flow of material between different parts of the network arise in a number of settings including the Internet (transporting information), the electrical grid, and road and rail networks. Such networks are described not just by the graph structure on vertices (such as servers or power plants) with edges representing valid connections, but also by edge weights arising through phenomenon such as congestion or geographical distance. My work in this area includes:

Emergence of connectivity within networks

One of the foundational pieces of probabilistic combinatorics goes back to the 1960’s in the work of Erdos and Renyi. They found the following amazing phenomenon even for the simplest possible network model: start with n individuals. Fix a parameter λ that measures “average’’ number of friends per person in the network. Each individual connects to every other individual with probability λ/n. Then they found that when λ<1 the size of the largest connected component

, when λ=1 the largest and second largest components scale like

whilst for λ>1 the size of the largest connected component scaled like f(λ)n where f(λ)>0 so was of the same order of the size of the network. Thus analogous to various phase transitions in physics (ice turning to water beyond a critical temperature), λ=1 is called the critical time for this model. In the ensuing decades, mathematicians found this sort of phenomenon for a host of network models and further found connections between the emergence of the large connected component as one traverses through the critical time and various models of gelation phenomenon in colloidal chemistry.

In this area my work includes:

Algorithmic and statistical applications of networks

In this area my research includes:

[10] Shankar Bhamidi, Nicolas Broutin, Sanchayan Sen, and Xuan Wang. 2014. Scaling limits of random graph models at criticality: Universality and the basin of attraction of the Erdős-Rényi random graph. Will be Re-submitted to Annals of Probability (2014).

[46] James D Wilson, Simi Wang, Peter J Mucha, Shankar Bhamidi, and Andrew B Nobel. 2013. A testing based extraction algorithm for identifying significant communities in networks. Under revision for the Annals of Applied Statistics (2013).

Theme by Anders Noren — Up ↑